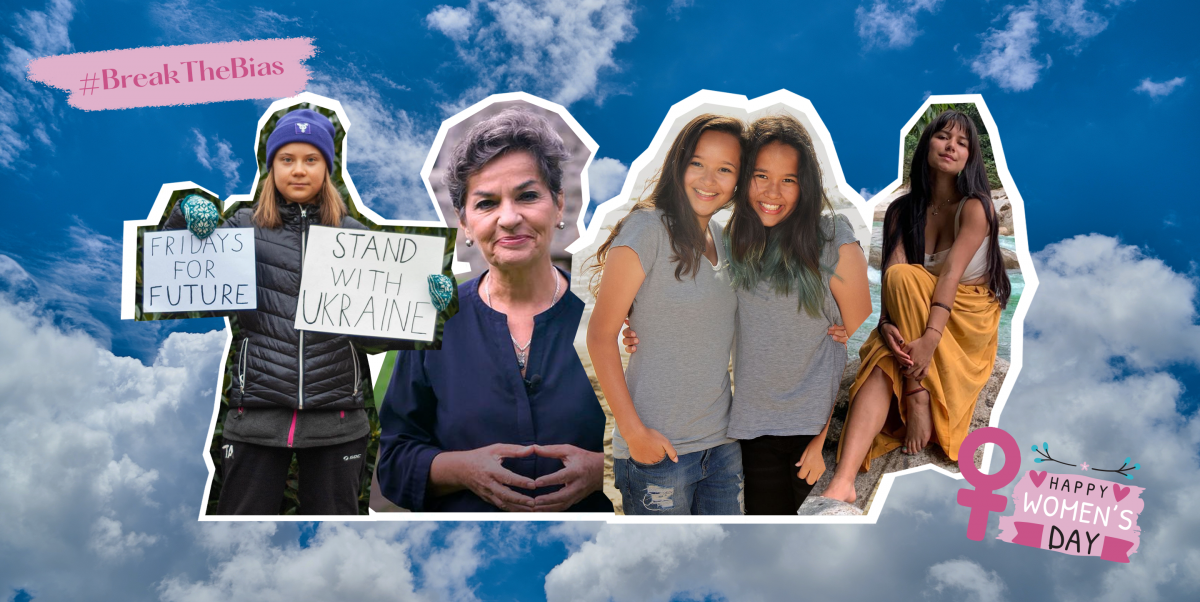 Did you know? Women are at the frontline of the fight against climate change. The UN estimates that 80% of those displaced by climate change are women, and in the looming global-warming crisis, women bear the brunt of the burden mainly because of gender inequality in many parts of the world.

Despite these challenges, women have continually risen up as agents of change, and as we celebrate International Women’s Day on 8 March, we recognise the efforts that these female activists, scientists, thought leaders, innovators and policy-makers have made to champion their cause.

From promoting plant-based diets to bringing communities and governments together, using new technologies to recycle waste, to protecting the oceans, here are eight of the world’s leading female voices in sustainability that are speaking out loudly for animals and the planet.

It was a school field trip to a waste-management facility that inspired Chinese-Canadian Miranda Wang to start Novoloop (formerly BioCellection). She and her best friend were shocked to see the enormous amount of plastic going to landfill, and the alarming statistics that came with it.

Currently, the world produces around 380 million tonnes of plastic per year, and an estimated only 8.8 percent is recycled, which means the rest piles up in landfills and contributes to soil, water and air pollution.

Wang’s Silicon Valley startup has developed recycling technologies that transform unrecyclable plastics, particularly polyethylene (PE) into high-quality material that can be used for everything from 3D printing to consumer products such as shoes and mobile phones.

The process is cheaper than extracting the material from fossil fuel resources. The company’s California facility has been so successful that it has been recognised by the UN Environment Programme, and Wang plans to bring her technology to the world stage.

A vegan at age six and TEDx speaker at age 10, Genesis Butler, now 15, has accomplished so much in the area of animal rights at such an early age. Her “A 10-Year-Old’s Vision for Healing the Planet” TEDx Talk,  which discussed the negative impact of animal agriculture on the environment and how she stopped eating meat, was just her first foray into animal rights activism, and since then, she has earned numerous awards in recognition for her work. She was even named one of the top eight activists changing the world by the BBC, and PETA’s Young Hero Award.

Butler started her foundation, Genesis for Animals, to provide funding to sanctuaries who provide animals with a permanent home. She has worked with nonprofits such as Farm Sanctuary, Humane Society of the United States and Mercy for Animals to promote a plant-based diet. In 2019, Butler was the 2019 Million Dollar Vegan ambassador, where she met with an international coalition of scientists and policymakers to discuss the impact of diets to fighting global warming. She is currently leading the Youth Climate Save movement, the first youth-led environmental organisation that focuses on animal agriculture’s impact on climate change.

A marine biologist with a Harvard degree and Ph.D. from the Scripps Institution of Oceanography, Dr. Ayana Elizabeth Johnson has used her expertise to bring awareness on issues regarding ocean preservation, educate business and agencies, and effect policy change.

She is co-founder of Urban Ocean Lab, a think tank for coastal cities, and co-editor of bestselling book All We Can Save, a 2020 collection of essays from 60 women at the forefront of the climate movement, which launched The All We Can Save Project, aimed at building dialogue among communities to come up with solutions to climate change. She also co-authored the Blue New Deal, a climate policy document for the ocean.

Dr. Johnson is also the co-creator of How to Save a Planet podcast, and writes on related topics for The New York Times, Washington Post and Scientific American.

A voice for indigenous communities in the battle against climate change, Helena Gualinga hails from Sarayuku, a small community in a remote area in the Ecuadorian Amazon. Like many indigenous groups of the Amazon, the Sarayuku face the threat of losing their resource-rich land to exploitative industries like oil giants, and growing up, Gualinga’s family have been involved in fighting off these companies’ attempts to gain access to their land. Now, she is leading the charge to preserve the Amazon and their people’s autonomy. Living between Finland and Sarayuku has allowed Gualinga to bring attention to the Amazon communities’ plight on an international scale.

At the UN Climate Change Conference (COP25) in December 2019, she called out world leaders’ negligence bringing up how the Ecuadorian government authorised oil extraction in indigenous land. In 2020, she spearheaded Polluters Out, a project that involves more than 200 young climate activities, scientists and indigenous people from more than 40 countries around the world, including Ecuador, Argentina and Colombia, with the aim of breaking the fossil fuel industry’s sphere of influence, especially in relation to policies towards climate change, and adding indigenous rights into the Paris Agreement.

With a three-decade-long trajectory in the field of climate change, Christiana has brought governments, corporations, activists, NGOs, think tanks and financial institutions together to deliver effective policies on climate change.

She served as the Executive Secretary of the United Nations Framework Convention on Climate Change from 2010-2016, which culminated in the historic Paris Agreement of 2015, where 196 parties agreed to work towards limiting the earth’s global warming level to under 2.

She is a member of the B Team and has also served on the boards of ClimateWorks, World Resources Institute, and Impossible Foods. Christiana is the co-founder of Global Optimism, co-host of the podcast Outrage & Optimism, and co-author of the recently published book, The Future We Choose: Surviving the Climate Crisis.

It was four years ago when a 15-year-old Greta Thunberg skipped school in Sweden to sit outside the Swedish Parliament, demanding urgent action on the climate crisis. Since then, her message has spread like wildfire, resulting in Fridays for the Future, a youth-led, global strike movement that started in August 2018, and Greta becoming an outspoken voice confronting the world’s leaders in the World Economic Forum at Davos, COP 24, and the UN Climate Action Summit with thought-provoking speeches.

She has inspired many to reduce their carbon footprint, and to speak out in their own communities to effect change. On the world stage, her influence has been dubbed the “Greta Effect” or the ability to mobilise big groups of society into action, regardless of age. She has received numerous honours and awards, including Time’s 100 most influential people and the youngest Time Person of the Year, inclusion in the 100 Most Power Women in 2019 Forbes list, and nominations for the Nobel Peace Prize in 2019, 2020 and 2021.

Sisters Melati and Isabel Wijsen were just 12 years old when they started Bye Bye Plastic Bags, a Bali-based movement to eliminate the use of single-use plastic and to raise awareness for causes of ocean pollution.

Since their start in 2013, the BBPB youth-driven movement has spread globally to more than 57 other locations around the world, with team leaders in each city leading the charge, bringing awareness to the issue of pollution, working with local governments to reduce or eliminate the use of plastic bags in their cities, and organising events like beach clean-ups, just like the sisters did.

In 2019, a law banning the use of single-use plastic in Bali was put into effect. Named among the world’s most influential teenagers by Forbes, Time and CNN, Melati and Isabel have also shared the spotlight in speaking engagements from TED Talks to United Nations’ Conferences and the IMF World Bank Forum.

Recently, Melati was the subject of 2020 documentary Bigger Than Us, focused on another initiative that she founded, called Youthtopia, with a mission to bring young people together to grow their skills and become active changemakers.

An oceans advocate and founder of eXXpedition, Emily Penn sails with all-female crews of activists, scientists and journalists to investigate causes and develop and communicate solutions for ocean pollution. She has also been involved in large-scale community-led waste cleanups, has been on a hunt for microplastics in the Artic Northwest Passage and around the planet in a biofuelled boat Earthrace.

Penn also founded Pangaea Explorations, which enabled scientists and filmmakers to access the most remote parts of the planet to collect data, and discover huge areas of plastic pollution accumulation, called oceanic gyres. During the pandemic, she moved into providing virtual expeditions to continue raising awareness for her cause, and launched SHiFT, an online platform that offers different alternatives to tackling pollution and plastic dependence that people can easily adapt in their daily lives.

Penn also filmed a documentary piece for the Discovery Channel under the series Change Drivers, which investigates toxic chemicals found in the body, how these are absorbed into the body and the potential effects of the toxins to pregnancy and the next generation. 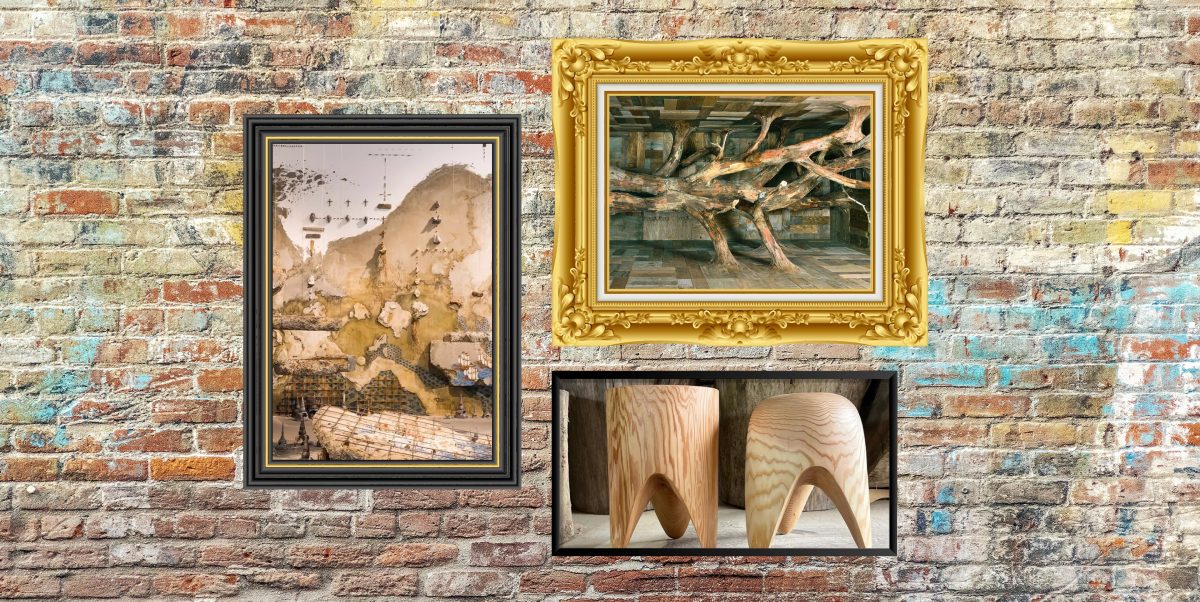 Learn about the intersection of art and sustainability through our picks of some of the most intriguing artists working with sustainability. 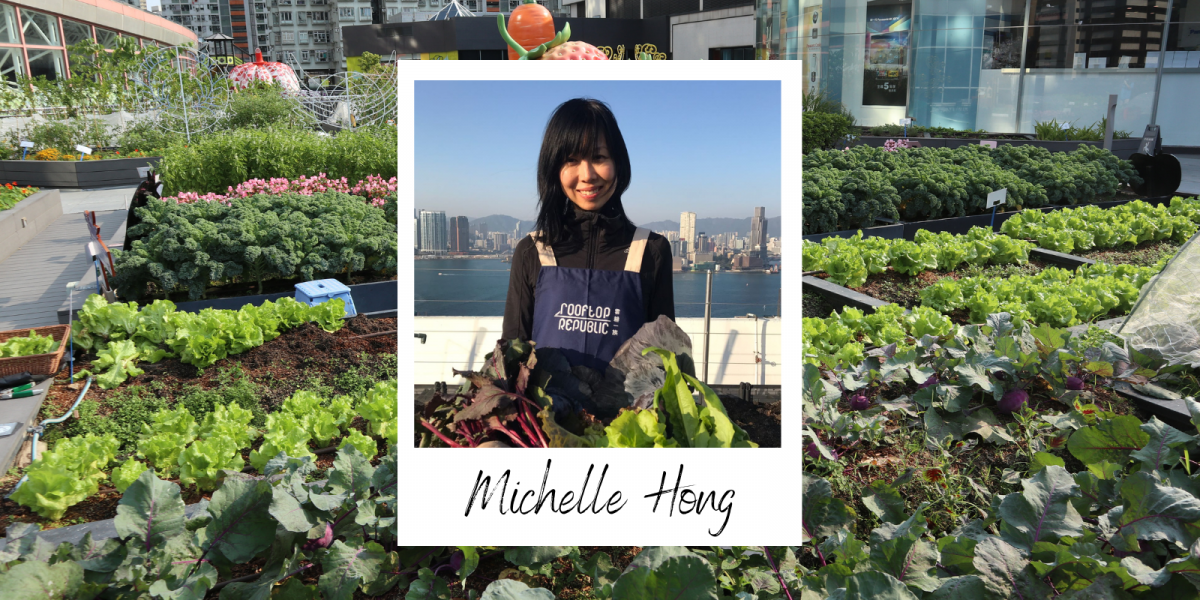 For our latest edition of ‘8Shades Of’, we spoke to Michelle Hong, the green-fingered co-founder of Rooftop Republic, about the benefits of urban farms in Hong Kong, tips for novice gardeners and why we should all know where our food comes from. 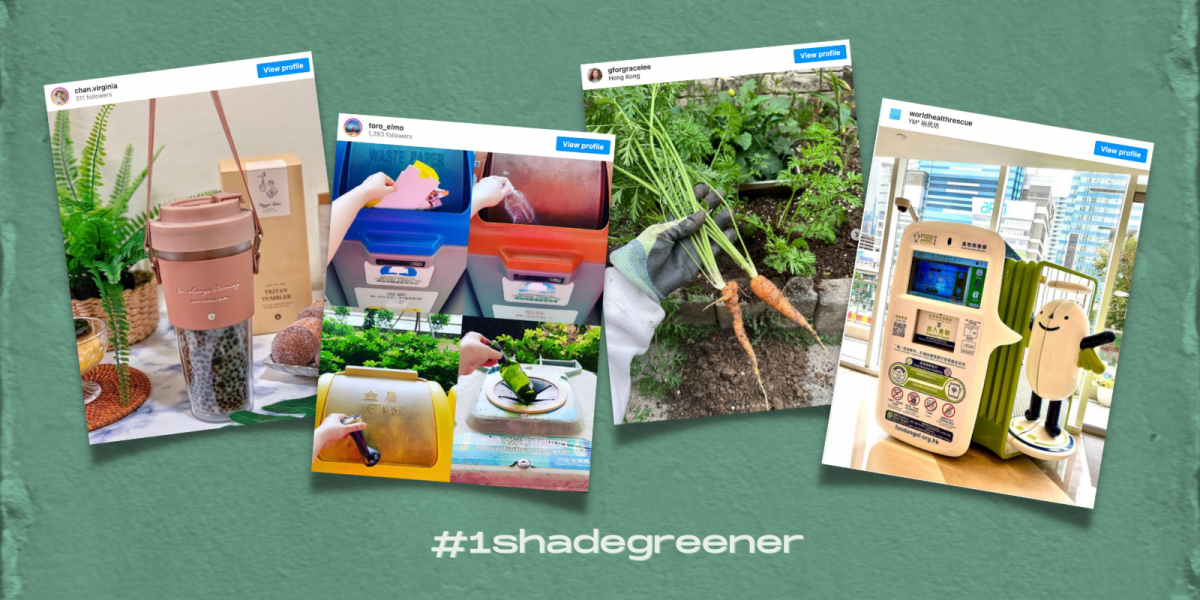 From gardening to recycling and everything in between, here are some of the best #1shadegreener entries for 8Shades on Instagram celebrating our sustain-iversary!